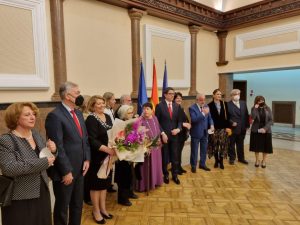 The state award “St. Kliment Ohridski ”for 2021 in the field of upbringing and education is awarded to the university professor Gulumser Kasapi, winners in the field of culture and art are the writer Jovan Pavlovski, music artist Snezana Anastasova-Chadikovska and Elena Donceva, academic painter-costume designer.

The award was presented to the winners on December 8, 2021 (Wednesday) at 12 o’clock, in the Formal Hall of the Assembly of the Republic.

Among the winners we highlight “our” Elena Doncheva, costume designer in a dozen Macedonian feature and TV movies, as well as hundreds of theater and ballet performances. Two years ago, Donceva was the winner of the “Golden Lens” award given by the Cinematheque of Macedonia on the occasion of her birthday in recognition of individuals who with their professional work contributed to the creation, development, promotion and popularization of Macedonian cinematography.

Elena Doncheva was born in Skopje in 1942. She is an artist, film, television and theater costume designer. She graduated from the Academy of Applied Arts in Belgrade in 1967, then worked at Radio Television Skopje, and from 1977 worked as a costume designer at the Macedonian National Theater in Skopje, until 2001 when she retired. 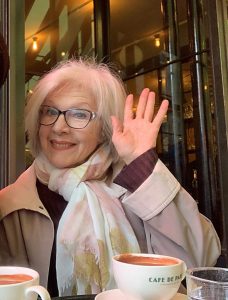 She is a costume designer in all of Kiril Cenevski’s films – BLACK SEED, MISERY, THE LEAD BRIGADE and KNOT; in the two films made by Stevo Crvenkovski, SOUTH PATH and HAVEN’T I TOLD YOU, then in the debut film by Antonio Mitrikeski – OVER THE LAKE, as well as in the film THE PIANO ROOM by Igor Ivanov-Izi.

As a costume designer, Doncheva has realized over 400 theater, opera and ballet performances, TV movies, series and shows, and has been a guest on stage projects in the USSR, Germany and France.

She has won several awards and recognitions in the country and abroad: 17 awards for costume design solutions of “Vojdan Chernodrinski”, as well as one award for lifetime achievement; the Jovan Bigorski Award from DLPUM for her costume design work; the Costume Design Award for Rahim Burhan’s Bloody Weddings at the Pralipe Theater in North Rhine-Westphalia; Steria Award for costumes in the play Wild Meat (1980, Novi Sad); the costume design award at the International Comedy Festival “Naked Moon” for the play “12th Night” at the Strumica Theater…

The “Slovenic Screen” magazine named Elena Donceva the best costume designer in the Yugoslav production in 1975 for the film MISERY. Doncheva was a costume designer on two majorcelebrations of Youth Days in Belgrade on May 25.