In the Small Hall of the House of Culture in Bitola was promoted the monography “40 years of ICFF Manaki Brothers”, published by the Cinematheque of Macedonia on the occasion of 40 years since the founding of the festival “Manaki Brothers”.This is the first major edition to mark the jubilee of this festival, which is one of the few in the world that is thematically defined – focused on film photography and the work of photography directors, cinematographers.The Manaki Brothers Festival has grown from an event entitled Manaki Meetings (1979-1991) into a Yugoslav camera festival, gaining international character after Macedonia’s independence, and today is officially known as the Manaki Brothers International Film Camera Festival. The monography follows the development and rise of the festival. 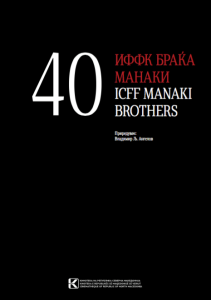 The monograph “40 years of IFFC Manaki Brothers” is part of the institutional memory of the “Manaki Brothers” festival and is financially supported by the Film Agency. The monography was published at the end of 2019, but, unfortunately, the pandemic with Covid-19 ruined the plans for its promotion. However, although delayed, it happened right where itsplace is, at the Manaki Brothers ICFF.Vladimir Angelov, director of the Cinematheque, Igor Stardelov, filmologist-consultant at the Cinematheque, and Stefan HadziAndonovski, longtime chronicler of film events in Bitola and the good spirit of the amateur and non-professional film from the cinema club “Camera 300” spoke about the monograph at the promotion. 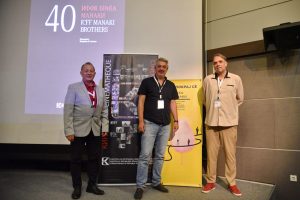 Authors of the published texts are Angelov, Stardelov, HadziAndonovski, Gena Teodosievska, former director and artistic director of the festival, BlagojaKunoski-Dore, longtime selector and artistic director of the festival, Paul Rene Rostad, President of the International Federation of Cinema (IMAGO) MihaBrun, film critic and journalist from Ljubljana, Nigel Walters, vice president of the British Cinematographers Association (BSC), DuskoDimitrovski, film critic from Vienna (frequent guest of Bitola), XhevdetTuzlic, film critic and editor of the national television BHT1…Angelov spoke about the monograph from the initial idea to its realization in print, the cooperation with the authors of the articles and the development phases of the festival. Stardelov recalled the first international edition in 1993 organized by the Cinematheque of Macedonia, when the festival received its current format and name ICFF “Manaki Brothers”. HadziAndonovski evoked memories of the first editions from the late 70s and early 80s, when the festival took the form of a manifestation of cinematographers from the former Yugoslavia, as well as Bitola, the city of Manakievci and a UNESCO film city.

The monograph is full of photos from festival ceremonies, events, round tables, master classes, as well as press clips of articles published in the print media. The contents are bilingual – in Macedonian and English.The journalists present at the promotion, who have been following the festival for many years, have already found some of their published articles published in the media over the past decades. It only confirms the basic intention of creating this monograph as a collective memory of the events of “Manaki Brothers”, as well as the desire to upgrade it in the years to come, both for the festival and its viewers, organizers, reporters, guests…The Cinematheque of Macedonia has also published the digital edition of the monograph “40 years of IFFK Manaki Brothers”, which can be found at the following LINK.