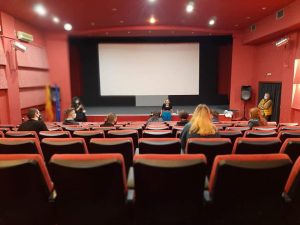 The Cinematheque continues with its FILM CLASSROOM – a project for creative education in the field of film and audio-visual heritage, intended for high school students.

“Watch movies, learn and create” is the motto of our interactive film classroom through which participants will be able to learn about the national audio-visual cultural heritage, the basics of the film language and will have the opportunity to create their own, original film etudes, inspired by the rich treasury of Macedonian cinematography.

The idea of ​​the project is to raise the awareness of young people about the meaning, value and impact of the national audio-visual heritage, to encourage research curiosity, to introduce research skills, with the idea of ​​involving them in discovering new audio-visual materials from local and private archives, as well as developing the imagination to create personal audio-visual stories, inspired by the history of Macedonian cinematography.

This year we are initiating a new project – Film Classroom for teachers and professors, and the first film classroom will be intended for them.

The project starts on October 16 and will last for 10 weeks. The film classrooms will take place every Saturday in the premises and cinema hall of the Cinematheque, there will be 5 school hours dedicated to one topic, and will consist of lectures, exercises and creative workshops, watching movies and discussions. The lectures will be realized by filmologists from the Cinematheque and film professionals.

The creator of the whole project is the director MarijaDzidzeva, who will also be the coordinator and moderator of the lectures.

With the project “Film Classroom: watch a movie, learn and create” we open the gates of the film archive of the Cinematheque, which brings young people closer to the film heritage, and by watching movies, interactive learning and creative socializing we inspire them to gain knowledge, discover new worlds and by channeling their own expression to create their own works.