FILM PROGRAM MAY 2021 IN THE SUMMER CINEMA “A QUIET SUMMER” 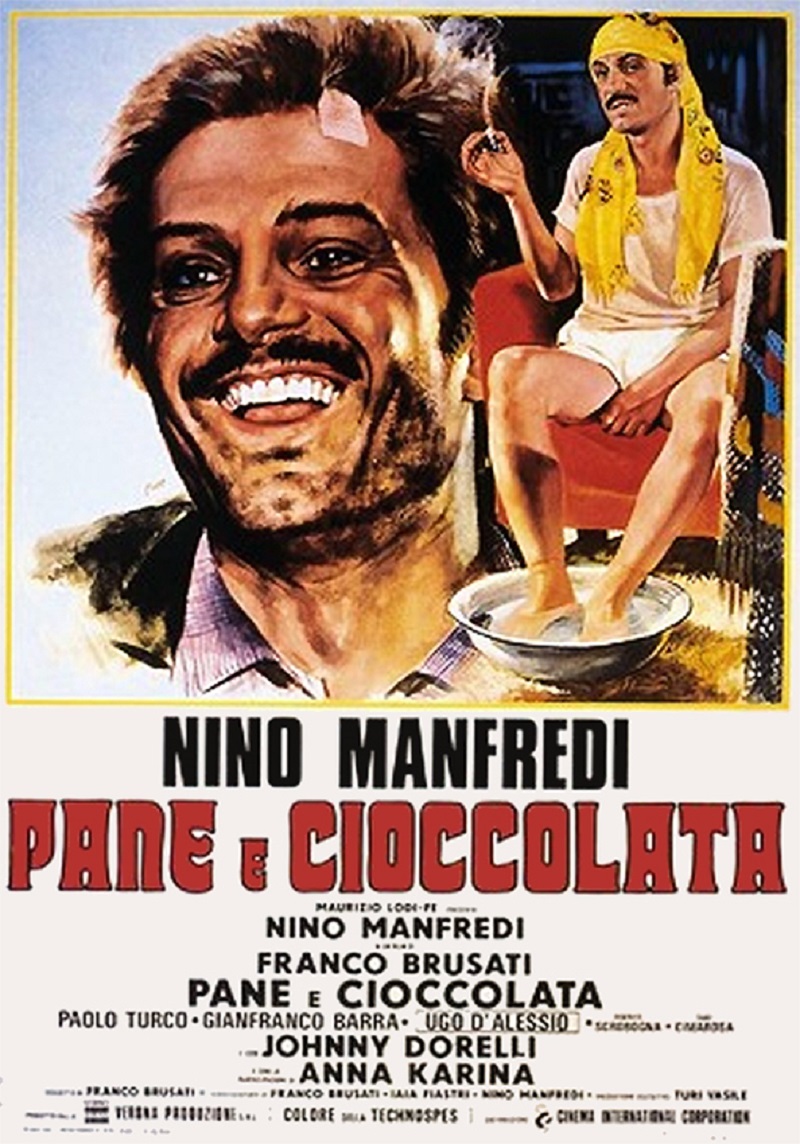 A bitter comedy about the maladaptation of the Italian economic emigrant in Switzerland Nino Garofalo (played by Nino Manfredi). Nino is a worker who tries, but can not fit into the Swiss mentality: he is constantly in conflict with the police, because with his unbridled southern temperament he disturbs the “cold” Swiss. Nino soon meets new people, finds new work engagements, but he has to hide his Italian origin from everyone. Despite everything, he does not give up to “conquer” Switzerland …
Director Franco Brusati (1920-1993) was a lawyer by education, and began his career as a journalist. He began working as a screenwriter with directors Latuada, Rossellini and other representatives of Italian neorealism, and made his directorial debut in 1956 with the film I AM THE BOSS (Il padrone sono me). The most important titles in his filmography, apart from BREAD AND CHOCOLATE, are TO FORGET VENICE (Dimenticare Venezia, 1979), who was the Italian representative for “Oscar”, DISORDER (Disordine 1967), GOOD SOLDIER(Il buon soldato 1982), etc. … BREAD AND CHOCOLATE won the Silver Bear at the 1974 Berlinale, the David Di Donatello National Awards in several categories, the New York and Kansas Film Critics Awards, and dozens of other nominations. 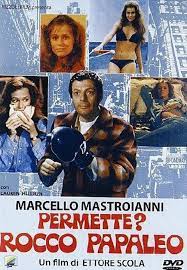 Rocco Papaleo (Mastroianni) is a simple-hearted and kind Italian immigrant who arrived in the United States 20 years ago with the intention of making a successful career as a professional boxer. Instead, he works in a mine in Alaska. During a trip to Chicago with friends, with the intention of having fun in the big city, Rocco gets lost in the city crowds. He meets various picturesque characters, he also meets a beautiful girl-model (Hutton), but he does not find the desired hospitality …
Ettore Scola (1931-2016) is one of the most striking representatives of Italian cinema from the second half of the last century. His film ONE UNUSUAL DAY (Una giornata particolare, 1977): winner of the Golden Globe, also nominated for an Oscar; Nomination for Best Actor (Mastroianni) – is among the most famous of the 40 titles in his career, including the films UGLY, DIRTY, EVIL (Brutti, sporchi e cattivi, 1976), WE LOVED EACHOTHER VERY MUCH (C’eravamo Tanto Amati , 1974), BAL (Le bal, 1983), etc. Scola has won numerous awards at many of the most prestigious European film festivals in Venice, Cannes, Moscow….
Age category: 14 years
Ticket: free entrance 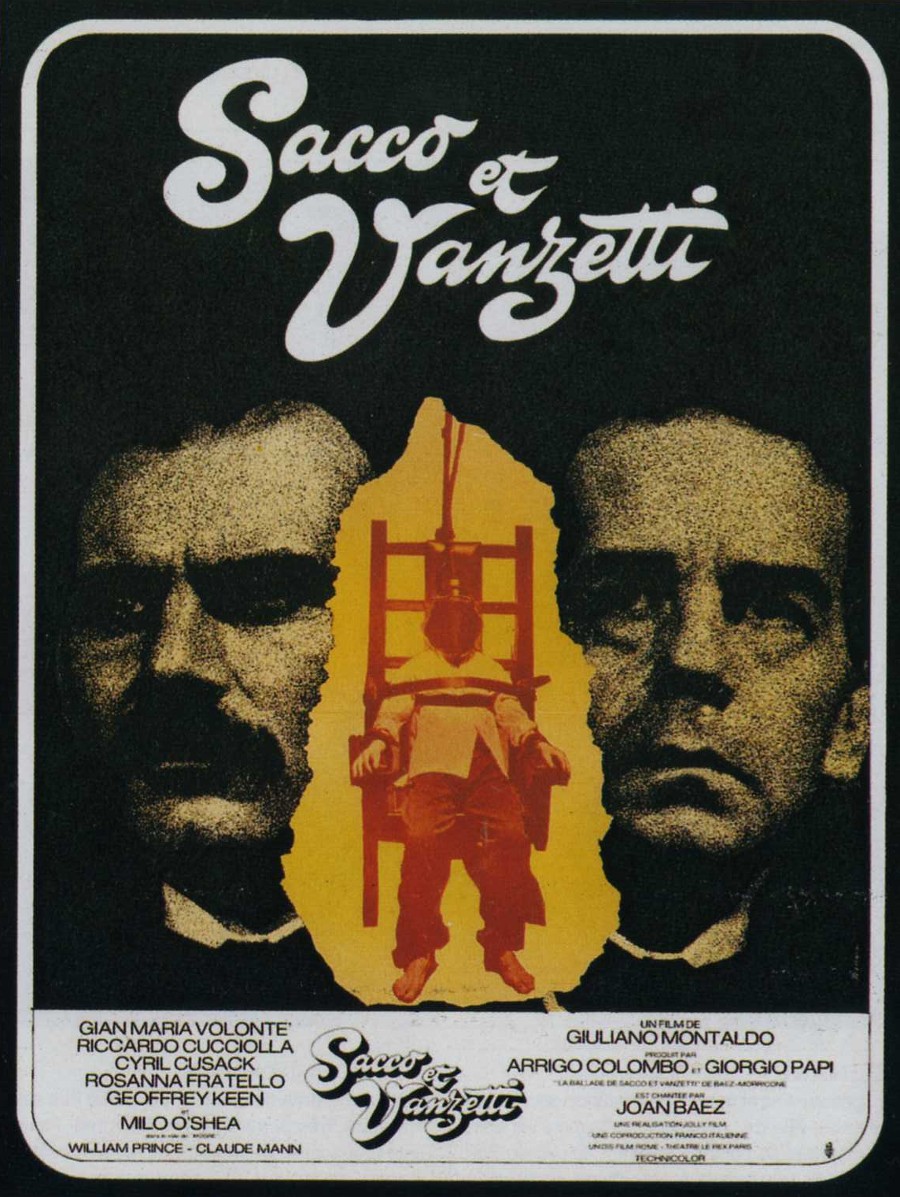 Another representative of Italian neorealism. The story of SAKO AND VANCETI – which also flirts with the spaghetti western style – is based on one of the most controversial legal cases in the United States in the early 20th century. Sako and Vancetti are Italian immigrants to the United States. They are anarchists, accused of first-degree murder, and unjustly sentenced to death by executing an electric chair, but not because of a crime (armed robbery), but because of their political convictions. Their case was widely publicized in the United States as a political process filled with anti-immigrant and anti-Italian motives …
SACO AND VANCETI of Montaldo was the winner of the Avellino Non-Realistic Film Festival (Best Picture and Best Actor: Cucciola); Cucciola also won the Palme d’Or (GOLDEN PALM), and Montaldo was nominated for the prestigious Cannes Award in 1971. The music in the film is by legendary composer Ennio Morricone, and several songs are performed by singer Joan Baez. Age category: 14 years
Ticket: free entrance 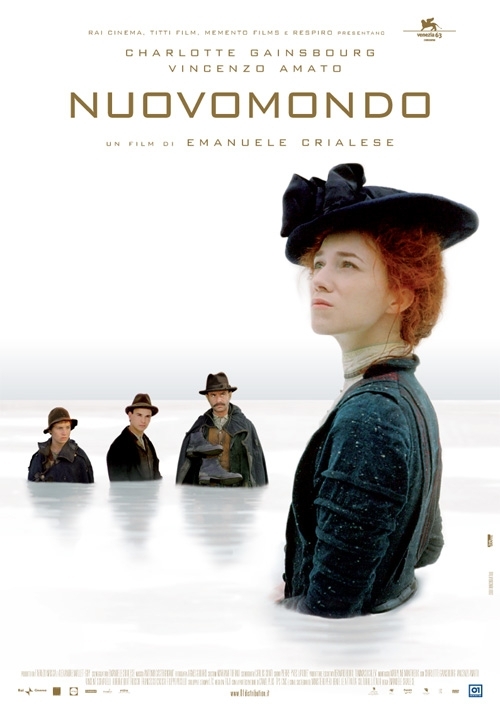 THE NEW WORLD (or GOLDEN GATE) is the third feature film by Chrialesse, a Roman of Sicilian descent. As in many other titles in Italian cinema – in fact, as well as this selection of titles in “Italian Film Week” – Chrialeze deals with the phenomenon of Italian emigration to the world in the early 20th century. Chrialeze’s story deals with the famous theme of the emigration of the family of Salvatore Mancuso (Amato) from poor Sicily, full of superstition, to a new world full of promises:USA.

Traveling by boat is difficult and arduous, especially in the claustrophobic shipwreck, intended for travelers with the cheapest tickets. When such crushed travelers reach the promised land, they await the insensitive officials on Ellis Island, that “golden gate” of the United States, where they have to go through quarantine and bureaucratic procedures.

THE NEW WORLD is a film made up of three visual parts: the first highlights the poetic landscapes of hilly and stony Sicily and its inhabitants with pagan customs and beliefs. In the second part, Salvatore, who constantly dreams of America, despite the fierce opposition of his mother (that patriarchal icon in Mediterranean cinema) sells out all his property. In the third, on the other hand, one step closer to the American soil, the mysterious beauty Lucy (Ginsbourg) appears, an elegant woman of mysterious origin, who will partially direct the fate of the male members of the Mancuso family …
Chrialeze’s NEW WORLD has got around 50 awards and nominations. In addition to the Silver Lion in Venice and several independent jury awards at the festival, Chrialezé’s film also triumphed at the David Di Donatello National Film Awards in Italy, then at the Capri Film Festival in Hollywood, and the Golden Apricot in Yerevan, Armenia, and a dozen other festivals around the world.
Age category: 14 years
Ticket: free entrance 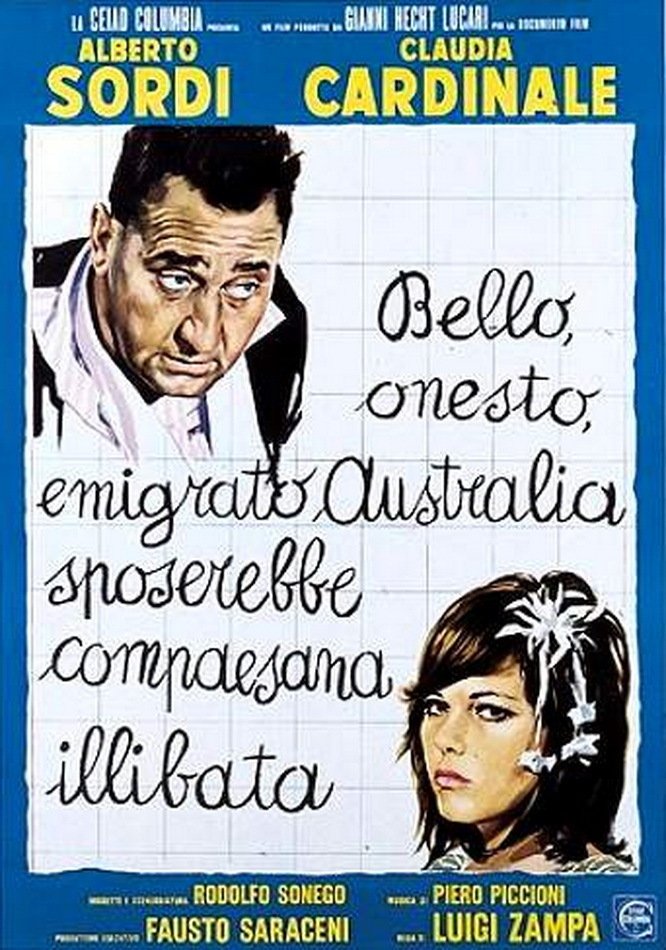 The young peasant Carmela (Cardinale) wants to escape poverty and prostitution as the only means of subsistence, so she accepts the offer of the local priest – to be the bride in a contract marriage with the Italian emigrant Amedeo (Sordi) in Australia and move to the distant continent. Amedeo is a telephone technician working in hard-to-reach areas of Australia. Shy as he is, girls are hard to reach . He wants to get married, so he “orders” a bride from his native Italy “by mail”.
He chooses the prostitute Carmela who no longer wants to work in the oldest profession, but in order to lure her to Australia, he sends a photo in the letter of his friend Giuseppe (Garone), who is more beautiful than him. When Carmela receives the letter with the marriage proposal and the photo of the groom, she agrees to travel to Australia. But when she meets Amedeo, she refuses to marry him: her choice is Giuseppe. Amedeo must devise a way to conquer Carmela and marry her …
The main actors in this Italian comedy with a long title won the audience and the critics: Claudia Cardinale won the national award of Italian cinematography “David Di Dinatello” for best female role in 1972, and Alberto Sordi was nominated for best actor by the Italian Film Critics Syndicate. .
Age category: 14 years
Ticket: free entrance 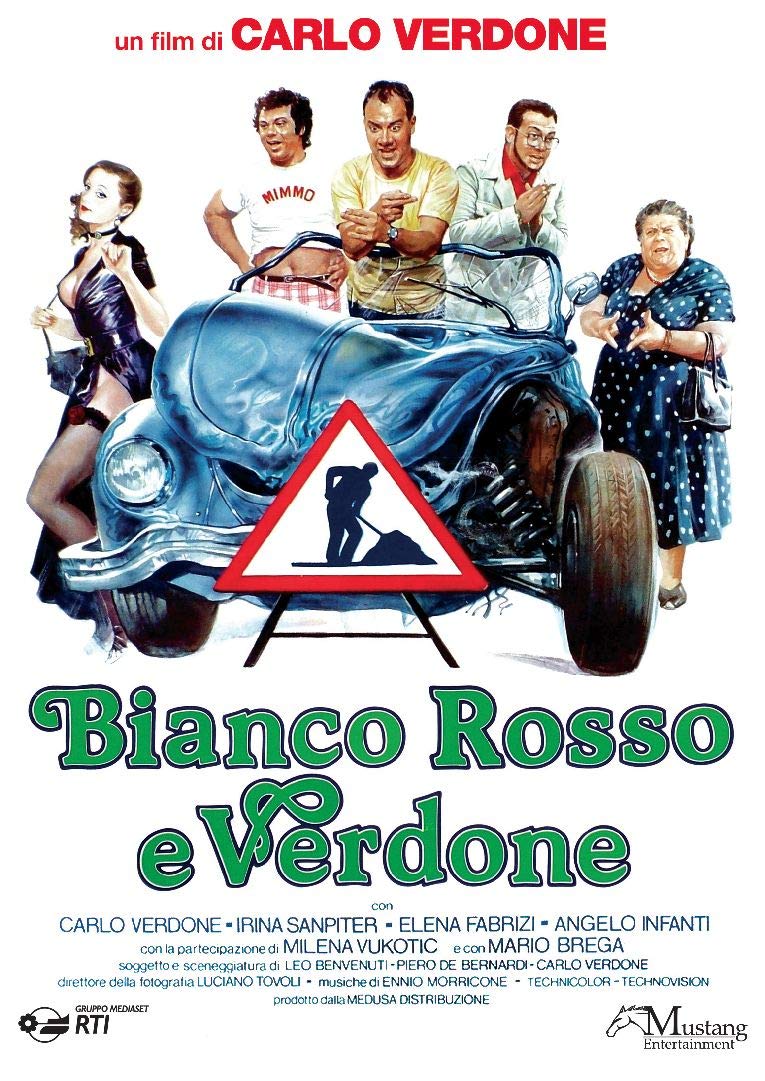 Carlo Verdone is the director, screenwriter and actor in this Italian comedy. The story is about three Italians who go to the their hometown on the day of the parliamentary elections. Pasquale is an Italian immigrant living in Munich, Germany, and is heading to the town of Matera in southern Italy, happy to spend at least a few days in his homeland, even though the country of his nostalgic memories is completely different from reality. Furio travels from Turin to Rome, so when he goes to vote, his wife Magda thinks he wants to run away from her. Mimo, on the other hand, is a young man traveling from Verona to Rome with his grandmother: He is constantly worried about her health, while his grandmother is completely cold-blooded … The roles of Pasquale, Furio and Mimo – are played by Verdone himself. The film is produced by Sergio Leone and music by Ennio Morricone and his collaborator Mario Brega; This team previously became known for the compositions from the “spaghetti westerns”, more precisely, after the so-called “Dollar” trilogy.
Verdone’s film received several nominations for the David Di Donatello Award, and Elena Fabrici won the Italian Film Critics Syndicate Award for Best Young Actress.
Age category: 14 years
Ticket: free entrance 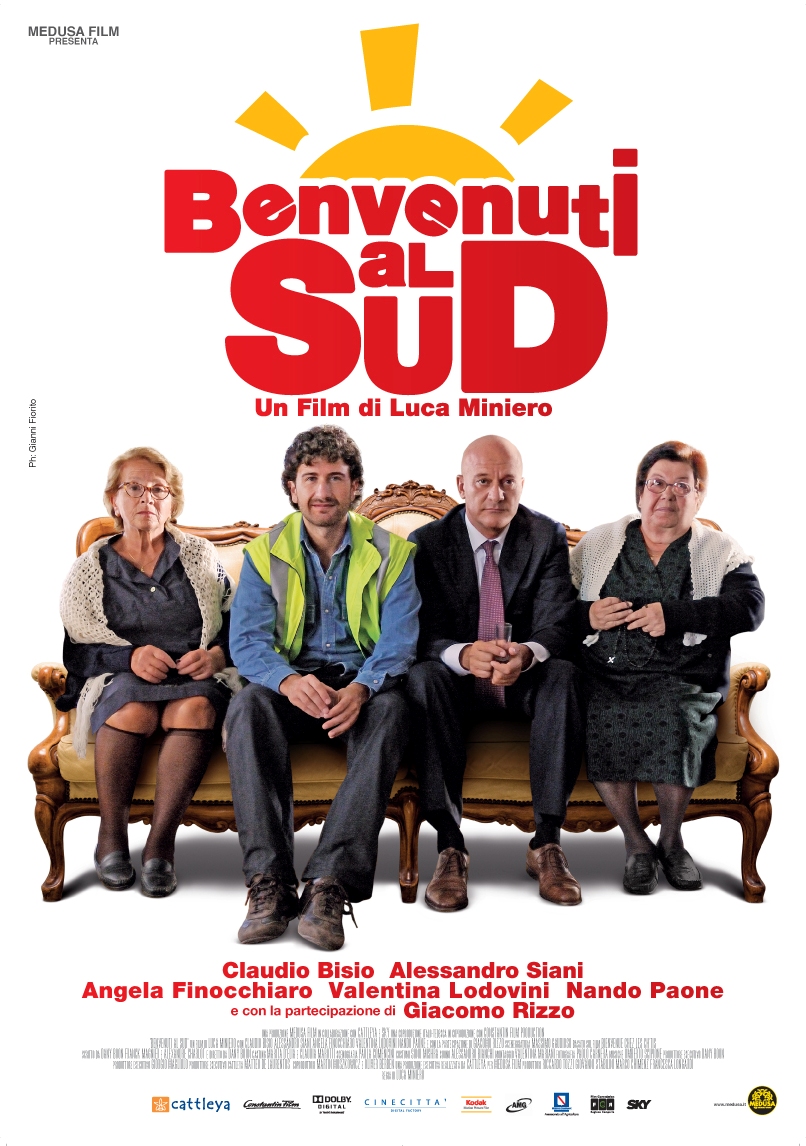 Alberto (Bizio) is a postman in the small town of Brianzi in northern Italy. At the urging of his wife Sylvia (Finociaro) he tries at all costs to get a transfer to Milan. Alberto will try to present himself as disabled, but will be caught in the scam, and after punishment will be transferred to duty in a small place in the south of Italy. Alberto is forewarned that all the inhabitants of the Italian South are lazy and connected with the mafia, because they do not work honestly and hard. But, to his own surprise, Alberto realizes that he has adapted very well to the new environment, he even enjoys it there, making friends with his new colleague, the postman Mattio …
After studying literature, Mineiro (1967) worked on numerous marketing campaigns, radio and TV productions with his collaborator Paolo Genovese. After the success of several short films in 2001, they co-produced a feature version of one of them, NAPLES MAGIC (Incantesimo napoletano), and Mineiro later continued his directing career on his own. WELCOME TO THE SOUTH is the most watched film in Italy in 2010, and won ten awards and thirty nominations in the country and the world: the Capri Film Festival in Hollywood, the “David Di Donatello” Awards, European Film Awards, Italian “Golden Globe”…
Age category: 14 years
Ticket: free entrance

This feature-length documentary follows a small group of LGBT + activists in Tbilisi, Georgia, as they try to organize the country’s first “Pride March”. They face strong opposition from far-right groups, the government and the Georgian Orthodox Church, which are inciting violent attacks on the LGBT + community. With the coveted membership of the European Union and anti-Russian sentiment on the political agenda, Georgians are at a turning point in history, where they must choose to fight for progress and human rights, or to succumb to greater Russian influence. In the midst of these geopolitical turmoils, the dedicated organizers of the “Pride March” in Tbilisi are bravely striving to be visible in their country …
Age category: 16 years
Ticket: free entrance

MAY 26 (WEDNESDAY), 12:00h.
AWARDING THE RECOGNITION OF THE CINEMATHEQUE “GOLDEN LENS”

A story about a young civil activist Lily Nazarov from Azerbaijan, who is persecuted by the authorities in his country. Lily tries to make a living from the art he creates in the countries where he resides. He was in Turkey, he stayed in Macedonia, and he plans to continue his journey in Albania … In every country where he stays, Lily creates a mural. In Macedonia, in Tetovo, his mural depicts three women killed in Azerbaijan. A 20-year-old girl committed suicide due to pressure from the family, then there is a transgender person, and a woman who was killed by her father-in-law.

Hawaii is a young fighter (style: mixed martial arts) from Chechnya who emigrated to Belgium. He had to hide from his compatriots after his brother discovered that Hawaii was gay. The events he survived left him in a state of shock and he lost his voice. With the help of a Belgian organization that protects young men like Hawaii, he learns to speak again and tries to find his place in the new country. Communication with his family is impossible – his only contact with the home is the voice messages on the phone from his mother. Meanwhile, Kadyrov’s tyrannical regime is behind his heels. It is possible that members of the Chechen diaspora in Belgium will inform for him, so he has to create a new identity. The film follows his moves and testifies to his struggle to “recreate” himself. The results are disturbing, but also shocking …
Age category: 16 years
Ticket: free entrance

<… In case of rain, the projectionss will be held in the cinema hall of the Cinematheque…>