Goran Radovanovic (Goran Radovanovic), one of the most agile documentarians in recent years in Serbian cinema, on November 26 (FRIDAY) is a guest at the Cinematheque of Macedonia with his two latest documentaries, The Makavejev Case or Trial in a Movie Theater and Waiting for Handke.

The documentaries will be screened at 18:00. and 20:00, and the author Radovanovic will answer the questions of the audience.

Radovanovic (1957, Belgrade) is an award-winning film screenwriter, director and producer, with fifteen projects in his professional portfolio so far, including two feature films. 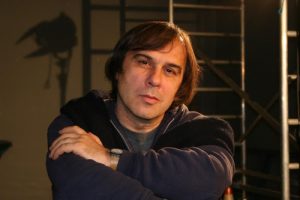 The Makavejev Case or Trial in a Movie Theater (2018, 74 min., Color / black and white, DCP) sheds light on perhaps the most extreme case of political censorship in the former Yugoslavia, the trial of the film V.R. MYSTERIES OF THE ORGANISM by director DušanMakavejev in 1971. Makaveev’s film raised a lot of dust and the political circles in the then Yugoslavia wanted to ban it at any cost, considering it as the peak of the so-called A “black wave” in Yugoslav cinema.Makaveev was inspired by the character and work of German psychiatrist / sexologist Wilhelm Reich, who after emigrating to the United States before the onslaught of the Nazi regime became one of the most controversial figures in the public, a real “thorn in the eye” for the conservatives as a man who corrupts American morality. 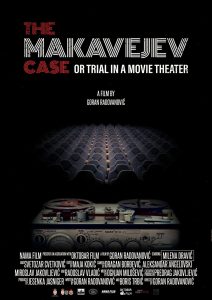 An unusual “trial” was organized, a kind of gathering of many self-governing people at the Arena cinema in Novi Sad, where the film was attacked for distorting the socialist reality in Yugoslavia (at the same time, world criticism hailed Makaveev’s film as the most communist film in that period).Speakers from various social profiles, from workers to regime intellectuals, lined up at the desk, condemning the author, and only a few of the speakers defended copyright. “We have the right in our democratic community to ban what we do not like in this country,” said one speaker. One of Makaveev’s collaborators secretly recorded the whole gathering with a hidden microphone in his sleeve. From the four tapes recorded at that gathering, Radovanovic reconstructed Makaveev’s political process, after which the director will emigrate from Yugoslavia and make the next few films in Europe, USA, Australia…Radovanovic’s film features surviving actors and collaborators from his ex-Yugoslav films, and his speech at the trial is interpreted by SvetozarCvetkovic, one of his favorite actors. “The film V.R. MYSTERIES OF ORGANISM has become a symbol of the film heritage left to us by Makaveev: film language as a game and an eternal experiment in directing and editing. “And the ban on this film over time became a symbol of Yugoslavia as an unfinished socialist experiment,” explains documentary filmmaker Radovanovic. 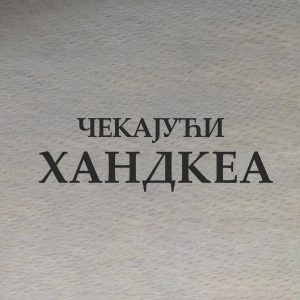 The film was awarded at the Belgrade FEST as the best domestic film and won the Critics’ Award, and won awards at both the Historical Film Festival in Croatia and the Taiwan Film Festival.WAITING FOR HANDKE (2021, 74 min., Color, DCP), which had its world premiere at the St. Petersburg International Film Festival in Russia in early November, follows the story of winemaker SrdjanPetrovic from VelikaHoca in Kosovo. After Petrovic heard the news that the Austrian writer with a Paris address, Peter Handke, won the Nobel Prize for Literature in 2019, he was inspired to put a plaque with the image of the writer on the wall of his winery.Handke has visited and stayed at the winery several times, and the erection of a memorial plaque in gratitude to this writer in the isolated and ghettoized Serb enclave of Kosovo becomes a Sisyphean venture that reveals the life drama of the remaining Serb population.Author Radovanovic says Handke’s stay in Serb enclaves in Kosovo seven years ago had a major impact on making his feature film ENCLAVA (Serbian Oscar nominee in 2016). Unlike the previous documentary – THE MAKAVEEV CASE OR TRIAL IN THE MOVIE THEATER, which is dominated by the audio recording, the story in WAITING FOR HANDKE rests exclusively on the picture.Peter Handke (1942) is of German and Slovenian descent, grew up in East Berlin, studied in Graz, and his prose in the 1970s is part of a new wave of German literature and film. Director Wim Wenders in the early stages of his career made the films Die Angst des TormannsbeimElfmeter (The Goalie’s Anxiety at the Penalty Kick, 1972) and THE AMERICAN FRIEND (American) according to Handke’s novels, as well as the masterpiece Der Himmelüber Berlin (Wings of Desire, 1987) – written by Handke. The writer in 1977 directed the film Left-Handed Woman (Die linkshändige Frau / The Left-Handed Woman) based on his novel of the same name.During the years of the break-up of Yugoslavia, unlike most Western European and American intellectuals and writers, Handke supported Serbs and the Milosevic regime – and denied the genocide of the Muslim population in Bosnia and Herzegovina. Those views a quarter of a century later, when Handke won the Nobel Prize, provoked a boycott of most Balkan countries. Screenings for both documentaries are free.