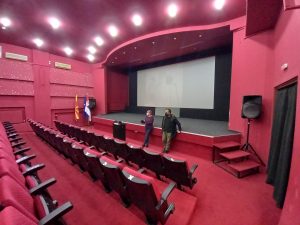 The fifth session of the second season of the FILM CLASSROOM project took place on November 27 (Saturday) at the Cinematheque. Today’s workshop focused on short experimental films: when do they appear as a form and what is their significance in the development of film as art and medium?
The lecturer of the workshop whose topic was the short experimental films was the filmologistAleksandarTrajkovski from the Cinematheque of Macedonia. Trajkovski himself is the author of short experimental films, and through a series of examples introduced the students to the phenomenon of experimental form in film. Trajkovski spoke about the process of observation and the big plan in the genre of experimental film form.
Natali RajcanovskaPavlevska, a doctoral student in art theory at the University of Belgrade, also took part in the conversation about the meaning of the experimental form. Pavlevska introduced the participants to the short history of experimental film and its main stages of development from the 20s, 50s and 70s of the last century, as well as the leading names who established this direction in film art.
In the second part of the FILM CLASSROOM the participants had the opportunity to see the film SHORT FILM ABOUT LOVE (Krótki film o miłości) by the Polish director Krzysztof Kieślowski, part of the series Dekalogfrom 1988.

This film by Keshlovski, starring GrazynaSzapolowska and Olaf Lubaszenko, tells the story of the social realist microcosm of gray buildings in a society without perspective. Nineteen-year-old Tomek (Olaf Lubashenko) falls in love with Magda, a 30-year-old promiscuous neighbor from the neighboring building (GracinaShapolovska). Tomek observes her activities and habits through a telescope, becomes obsessed, and decides to approach her and express her love… Although Keshlovski’s film is an established work, the theorists and critics in it recognized the emanation of the experimental form that the author nurtured throughout his career. 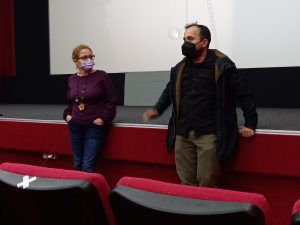 THE FILM CLASSROOM is a project intended for students from Skopje high schools, who under the mentorship of film and TV director MarijaDzidzeva through ten sessions, which are held every Saturday, have the opportunity to learn the basics of film history and film language. Participants have the opportunity to watch films from the archives of the Cinematheque, to analyze film works, and through the sessions of the FILM CLASSROOM to create short film etudes, which they then analyze together. The sessions of the FILM CLASSROOM feature guest lecturers-specialists in various fields of film art and the theory and history of film.
The educational project is supported by the Ministry of Culture. The FILM CLASSROOM includes a dozen high school students who through various educational content and interactive-creative learning get acquainted with the national audio-visual cultural heritage.