THE ITALIAN FILM WEEK HAS STARTED: THE DIRECTOR OF CINEMATHEQUE HAS BEEN DECORATED

On May 17 (Monday) with the projection of Bread and Chocolate (Pane e cioccolata ) by Franco Brusati on the stage of the summer cinema “Peaceful Summer” began the WEEK OF ITALIAN FILM. THE ITALIAN FILM WEEK, whose annual theme is emigration, is held for the 21st time in the world, and in Macedonia with a projection of thematically selected films in Skopje and Bitola.
Professor Marco Pescetelli the selector of the program of this year’s ITALIAN FILM WEEK was the first to address the audience in the full auditorium of the summer cinema at the Cinematheque. Thanking the hosts of the event, the director of the Cinematheque Vladimir Angelov and the staff for the cooperation and support, Pescetelli presented the thematic selection of films with different views of emigration.
“Most of them are comedies like tonight’s movie with Nino Manfredi, a very famous actor, whose centenary we celebrated this year,” said Professor Pescetelli, among others.
The Ambassador of the Italian Republic in Northern Macedonia, Andrea Silvestri, greeting the audience in Macedonian language, spoke about the idea of holding the manifestation WEEK OF ITALIAN FILM in the world and in our country.
Speaking about the phenomenon of migration, which is well known to both Italians and Macedonians, Ambassador Silvestri pointed out that today outside Italy. live about 60 million people with Italian roots.
The Ambassador also announced the special announcement at the opening of the ITALIAN FILM WEEK: the decoration of the director of the Cinematheque Vladimir Angelov with a badge and a plaque of the Knight of the Order of the Star of Italy (Cavaliere Dell’Ordine della Stella di Italia). The decoration is awarded by the Italian President Sergio Mattarella, on the recommendation of the Minister of Foreign Affairs of Italy, for special merits in the promotion of Italian culture and cinematography in Macedonia.
Director Angelov (b. 1968), editor and selector of film programs at the Cinematheque and at a number of film festivals in the country, author of numerous professional articles in the field of film criticism, history and theory, said that he received the Knight of the Order of the Star of Italy with great pleasure and honor.
“Michelangelo Antonioni said that a film that can be explained in words is not a real film. I really can not explain this film that is happening to me and therefore I will thank everyone who supported me, and some of them sacrificed themselves in my 26-year career at the Cinematheque. I would like to thank my family, wife and children, parents, who of course sacrificed … my extended family, friends, colleagues … of course, thanks to the Italian Embassy, especially the Department of Culture with which we have long cooperated in a highly professional level. “Indeed thank you to Italy, which as a country always keeps my eyes open, and the curiosity for film art unchanged, through the two festivals I often visit – the one in Bologna for newly restored films and the Pordenone silent film festival,” he said, among other things.
Mentioning part of the rich list of authors and actors who were his inspiration – and which in Macedonian sounds like a poem – Angelov wished the audience the next seven days to enjoy the magic of Italian films.
“Let time serve us and as an ending I will quote Fellini, because in cinematography nothing can be done without him: La vita è una combinazione di magia e pasta (Life is a combination of magic and pasta”, Angelov concluded.
By the end of the program we will have the opportunity to see MY NAME IS ROCCO PAPALEO (Permette? Rocco Papaleo ),1971 by Ettore Scola, starring Marcello Mastroianni; the realistic drama SACO AND VANCETI by Giuliano Montaldo; The award-winning NEW WORLD (Nuovomondo / Golden Door, 2006) by Emanuele Crialese; social comedy A GIRL IN AUSTRALIA by Luigi Zampa, starring Alberto Sordi, Claudia Cardinale and Ricardo Garrone ; the contemporary comedy THE TRIO GOES TO VOTE (Bianco, rosso e Verdone) by Carlo Verdone; as well as one of the most watched films in Italy in the last decade, WELCOME TO THE SOUTH (Benvenuti al sud )by Luca Miniero, which deals with the so-called “Internal emigration”, ie the eternal conflict between the Italian North and the South.
The titles of the movies that are on the evening program at 20:00h. will be rerun the next day at 18:00 h.
We inform the film lovers and friends of the Cinematheque that in this period of changeable weather, we reserve the right to change the location of any of the film projections, in order for them to be held and not postponed until a more meteorologically favorable occasion.
In case of rain, some of the projections will be held indoors, in the cinema hall of the Cinematheque, instead of the yard and the summer cinema PEACEFUL SUMMER.
The ticket office will be open every day from 19:00 and the projections are free and start at 20:00 h.
The projections take place in full compliance with the recommendations for protection against COVID-19. 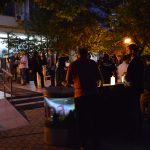 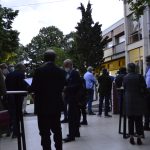 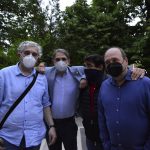 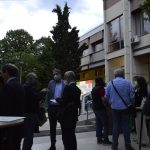 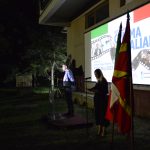 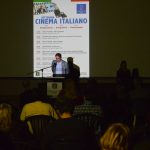 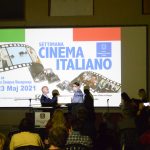 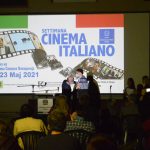 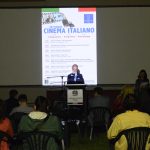 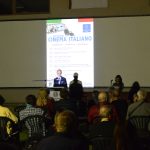