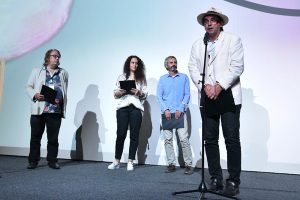 The audience and the journalists for six days of the festival had the opportunity to see ten feature and short films in each of the two official competition programs, selected by film critic Sladjan Penev and film director Darijan Pejovski.
-Despite all the obstacles and challenges we have faced in the past few months, tonight I can finally say that despite everything, we managed to continue the magic and dream our story to a pink happy ending. I would like to sincerely thank you for that. Why does it seem that exactly with the arrival in your and our port Bitola, all the storms that until then fiercely threatened us and threatened our festival ship stopped. After September 16, our sailing suddenly became peaceful and then with you, the Bitola audience, with you and our wonderful laureates and with the excellent international jury, we spent six flawless days in Bitola.
We had great competition programs, we held three film workshops, we had an exceptional six press conferences and several young girls and boys had the opportunity to learn how to make a film for the first time in their lives, a group of children had the opportunity to see an interesting children’s film. And during that time no technical problem or interruption occurred, said the director of the ICFF “Manaki Brothers”, Moni Damevski.
The joke at that moment in the hall turned off the electricity and the microphones did not work, and the director said that one of his team told him that Cannes, Berlin and Venice could envy us, to which the audience reacted with loud laughter and applause.

“Nothing can stop us, despite everything, we will continue,” Damevski said at the end.
The winners of the awards were announced by the members of the jury. The President of the Jury, Suki Medencevic, on behalf of the commission thanked for the hospitality and the honor given to us to choose the winners of the 42nd Edition of the ICFF “Manaki Brothers”.

– The work of the jury is always difficult. Nobody says that it is an easy thing because making such a decision is really difficult, but at the same time it was a pleasure because we had the opportunity to watch exceptional movies and the nuances were decisive, said Medencevic. 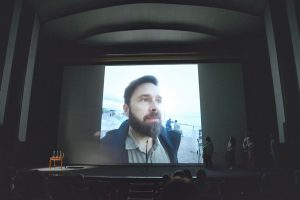 The winner of the “Small Camera 300” award for short film was announced by Sonja Prosenc.
– I am honored to announce the winner of this award. I am honored to award the prize to a young cinematographer because it is clear to most in the media world that very often women in this profession are given more chances when it comes to short films, while the more difficult tasks are often reserved for our fellow men colleagues .But I am glad that the Manaki Brothers Festival has already discovered and awarded more cinematographers and I am honored to announce the Small Camera 300 Award for short film given to cinematographer Joanna Silva Fernandez for the film “Through the Mist” , for the intuitive but at the same time minimalist use of visual storytelling, said Prosenz.
Thanking for the award, through video message , Joanna also thanked director Diogo Salgado for the opportunity to tell his story through pictures.
– I am really honored and happy that I was awarded this award at the festival where the work of cinematographers is celebrated. Making the film was an interesting process-like journey. “Thank you Manaki Brothers Festival and I hope to see you next year,” said Silva.
Dimo Popov said that the films are a reflection of the reality in which we live, in a time that is a bit strange, a little shocking, just like those photos of the Manaki brothers that we see when we enter the entrance of the cinema hall. A strange transformation is experienced by reality as it passes through the lens, strange colors, strange shapes and strange stories.
“Because of the brutal contrast between the disturbing dystopian story and its highly aestheticized visual style, we decided to give the Bronze Camera 300 to cinematographer Ruben Impens for the film ‘Titanium,'” Popov said.
Thank you for this amazing award. I am very happy, I thank the jury for recognizing and rewarding my work. I am sorry that I did not manage to come to Bitola, and I also thank Julia who was a wonderful partner in making the film. “I am very happy that you appreciate our work and wish you all a good evening,” Impens said in a video message.
Philip Bergson said that the motto of the festival was ” Despite everything” mostly refers to the pandemic that caused us really big problems and thanked the festival director and the festival team because, as he said “despite the miracle and succeeded this year to be held ICFF “Manaki Brothers”.
“For the delicate camera that brings us closer to the characters that are well positioned in the urban landscape of Oslo, the ‘Silver Camera 300’ is awarded to Casper Tuxen for ‘The Worst Person in the World,'” Bergson said. 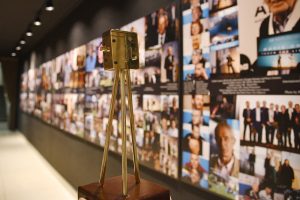 Thanking for the recognition with a video message, Tuxen said the whole team’s credit for this success.

-Thanks to the jury, to Joachim Trier, the director of the film, it was a pleasure to work on this film. This means a lot to me and I thank from the bottom of my heart individually all those who worked on this film, said Tuxen.
This was followed by the president of the jury, who announced the winner of the “Golden Camera 300” award.

-It is very nice when you can see how the cinematographers themselves admit thatall the work is part of a team effort and that the cinematographer is like a conductor who leads the orchestra and gives rhythm. Being a member of the jury is quite an intimate thing because we all appreciate different levels and that makes the decision difficult, but in this case the decision was easy for all five members of the jury.
For the delicate and sensitive way the camera takes the audience on the heroine’s crazy journey from Moscow to the frozen north, the jury awarded the “Golden Camera 300” award to cinematographer Yani-Peter Passy for the film “Coupe No. 6”, said Medencevic.